A Postcard from the Bleeding Edge

In the summer of 1977, I was one of millions of American nerd boys who flocked to see Star Wars: Episode IV – A New Hope. Of its many iconic scenes, one that really stuck with me was the scene where Princess Leia delivered Obi-Wan Kenobi a message of vital importance to the resistance – via a tabletop video hologram. Though George Lucas was telling a story that happened long ago and far, far away to other people, he was really envisioning our future. And as it turned out, it wouldn’t take that long to become a reality.

Looking back, I think that scene from Star Wars is in no small way responsible for drawing me to immersive computer interfaces. I eventually became a professional software programmer, working on random boring stuff for a few years, but at every job I would find excuses to work on 3D graphics. 3D charts rendered to inkjet printers. Real-time wireframe models to visualize data on workstation computers. Nothing fancy back then; the tech to make the really cool stuff wouldn’t land on laptops for another decade, and mobile phones for another decade after that. All this 3D tinkering eventually led me to an absurdly ambitious project to build the Metaverse: virtual people in 3D-rendered environments, communicating in real time, transcending time and space. That project, which came to be known as the Virtual Reality Markup Language, or VRML, was ultimately too early by twenty years.

It was back then that I met Mike Pell. Since I’ve known him, Mike has been on a quest to create software designs that put people at the center. Mike was early with 3D as well, working through a series of startup companies exploring how far he could push the boundaries of human-computer interface. These days, years might go by between our face to face encounters, but Mike is the kind of guy where when you do see each other again, you pick up right where you left off. Our most recent reunion came about a year ago, with Mike firmly ensconced at Microsoft and me with a new job at Unity Technologies. Two old soldiers, with gray hair but the same sparkle in our eyes, and the same mission: to make computers work for us.

Forty years have gone by since the premiere of Star Wars, and computers have come a long way. We appear to be at the cusp of a next great wave of breakthroughs, including mixed reality, voice recognition, artificial intelligence, and the Internet of Things. Combined with genetic engineering and advances in materials science, the possibilities are magical and limitless, and without a doubt will shape the next several decades of human endeavor.

3D interface is no longer a theoretical possibility; it’s the new reality. And with all this new potential comes the need for a new approach to design. To create mixed reality applications, the software designer must transform, becoming parts and alternately architect, interior designer, information designer, storyteller, filmmaker, game designer, and social engineer. But most importantly, we need to learn to envision.

Can you envision what a 3D Wikipedia will be like? How 3D maps, with elevation and physical features, operate when displayed as holograms on your tabletop? Speaking with 3D video holograms of your loved ones in some future version of FaceTime? Or a 3D PowerPoint, with persuasive presentation graphics rendered all around you?

You can? That’s great! But sorry; pretty much anybody can do that. Now, really challenge yourself: for any of these scenarios, imagine where and when they are used, by whom, and for exactly what. Go even further: how will these experiences not just be cool, more facile and more intuitive, but really change our lives? I don’t think that, a decade ago, most of us imagined the extent to which a phone-turned-computer would upend the world the way it has. I think we could have predicted Yelp. Maybe even Tinder. But Uber? AirBnB? Snapchat?

What are the holographic analogs to those wildly disruptive, life-changing applications? And how will we make them? That’s what this book is all about. It defines the conceptual framework, and shows the processes, techniques, and production tools to make them real. A lot of the material in here isn’t really specific to designing for holographic interfaces; it’s useful for many other endeavors. But to design for holograms, you’ll need all these and more.

Someday they may teach courses based on this book. I envision a future — probably after I have shuffled off this mortal coil — where the information in this book has become part of a canon on how to design and build the interfaces that save the planet, monitor and control automation, take us into outer space, and store and present the world’s information. Holograms will, without a doubt, be an integral part of that future civilization, in many more ways that George Lucas ever dreamed of.

The information in this book can make magicians of us all. 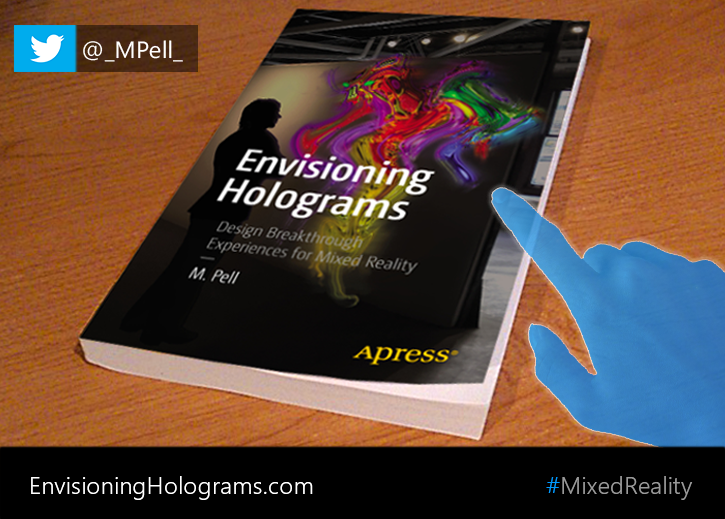 Learn more about the author M. Pell at Futuristic.com